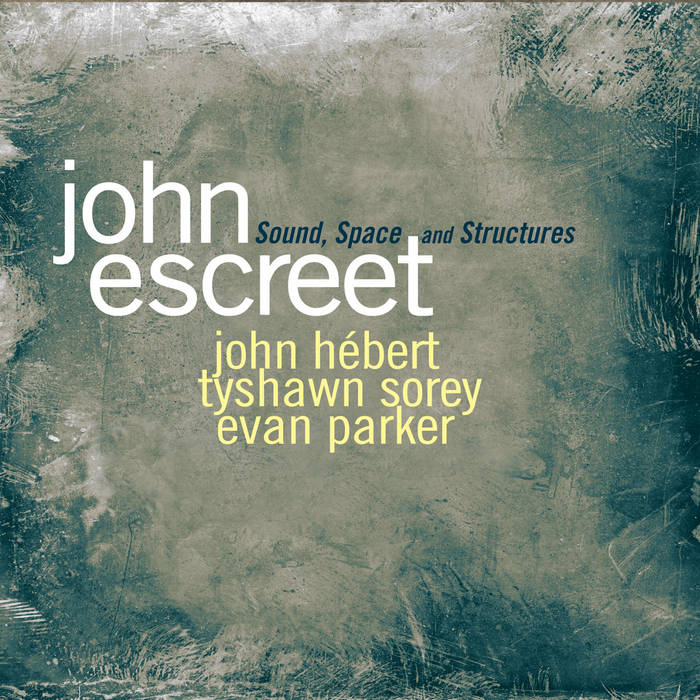 STEVEN PAGE This recording is astounding. I encourage all serious jazz fans to add this to your collection. This is pure ambrosia. Enjoy !!!

Jazz and contemporary improvised music have had numerous iconoclasts, who questioned and reshaped forms that they inherited, and, as an aural tradition, the music develops as these boundary pushers collaborate and share their knowledge, so the future generations of musicians can push ahead.

Pianist/composer John Escreet knew that he wanted to perform with just such a musician - the legendary saxophonist Evan Parker - for a long while. He was finally able to find the opportunity to partner Parker with his astounding Trio, featuring bassist John Hébert and drummer Tyshawn Sorey, on the remarkable Sound, Space and Structures.

The Doncaster, England born Escreet moved to New York in 2006. His deft approach to piano brought him quick attention from press and peers and allowed him to perform alongside many of jazz’s most celebrated musicians, including Antonio Sanchez, Chris Potter, Tyshawn Sorey, Ambrose Akinmusire and David Binney. Escreet’s own projects have focused around his Trio and Quintet - called the John Escreet Project - and have increasingly branched out into the worlds of modern classical and electronic music.

Escreet’s Trio has been together since 2010. The partnership with bassist Hébert and drummer Sorey has been extremely rewarding for all involved. Their music is a varied repertoire, from loosely sketched pieces and highly wrought thru-composed works to open-ended improvisations.

Escreet has been a long time fan of the master improviser Evan Parker. His fascination with the unparalleled work of the saxophonist was heightened by the fact that Parker was also an Englishman. This led Escreet to reach out to Parker on a few occasions. He met with interest from the saxophonist but they were unable to make their schedules work.

Nearly forty years Escreet’s senior, Evan Parker has become one of the most distinct and celebrated voices on the saxophone. Beginning his career in the caterwauling European free jazz of the 1960s, Parker has evolved into a truly unique musician. He has tested the limits of composition and improvisation on his own and in ever-increasing number of collaborations, from the intricate tonal minimalism of guitarist Derek Bailey to the overwhelming sound densities of Peter Brötzmann.

A perfect opportunity for an initial meeting presented itself when Parker was invited to curate a week at John Zorn’s performance space, The Stone. He invited Escreet and his Trio to perform with him on September 18th, 2013. The foursome played two completely improvised sets: the first being various duo settings and the second with the whole quartet together.

As Parker was in town for another week, Escreet arranged a recording session at Sear Sound on September 25th. For the recording, the musicians decided to use a similar approach: improvising together on a number of takes featuring various duo combinations and as a quartet. The recording session generated a number of very different pieces, which Escreet edited down to nine tracks for release, showcasing each individual and the results of their tremendous congregation.

The rich timbres of strummed piano and bowed bass strings initiate “Part VI,” a duet between Hébert and Escreet where they bounce sound between each other. “Part VII” is the focal point of the album with an uptempo performance by the entire ensemble allowing all the elements to blend and develop in a vast, colorful variety. The darkly atmospheric “Part VIII” has another duo of Escreet and Sorey creating an amazing soundscape, utilizing all parts of their instruments. The recording concludes with “Part IX” where a drum and soprano duet builds until a cloud-burst of aggressive piano and bass storm in only to drift away as swiftly as they sprang.

The impressive collaboration between John Escreet’s Trio and the luminary saxophonist Evan Parker on Sound, Space and Structures is truly revelatory. It provides a wonderful example of an innovator without boundaries working with equally passionate musicians of the next generation who plan to keep rattling expectations.

Bandcamp Daily  your guide to the world of Bandcamp